This is an old post from my personal blog. I moved it here so as to get all my technical content together.

We are able to view data from all over the world, chat with people on any continent, play games with or against any of our friends without leaving the comfort of our homes etc – All this is possible due to programs written using languages which remain invisible to the user. Such is the brilliance of the whole system we call software & I am thankful for being part of this line of work

The question ‘Which are the most popular programming languages?’ is important for people who are curious to know where their own programming language of choice stands in the battle for popularity. It even helps those of us who want to learn a new language & a small peep at what their colleagues all over the world favour might be the little push they desire.

Note : I wish to compare only languages which are used at the server side. Thus it excludes client side scripting languages like Javascript & markup languages like HTML, XML.

The TIOBE Programming Index is probably the only index which keeps track of the popularity of a programming language. Its updated every month. Thats why its regularly quoted by many articles. 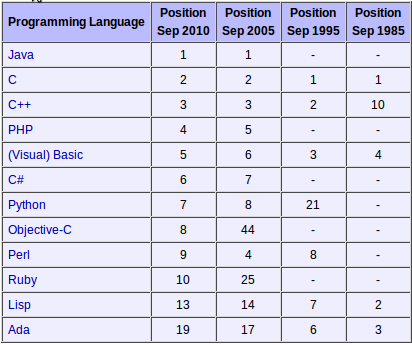 A better methodology is used here though it stopped being updated after Oct 2008. The language name is combined with a number of relevant words so as to give a more valid result. The PERL code used by the site is available. Hopefully at some point of time it will be reused for getting the appropriate results.

While looking at the server side programming languages, I tried another approach at comparison. I took the Top 10 most popular sites & listed out the language used in them. The results were mighty interesting !

In this little survey, PHP has come out the winner. Java & ASP.NET have more reputed sites among them (powerful companies are its developers + a dedicated support system ensures that big sites always use JAVA/.NET especially for financial transactions) but the open source languages like PHP, Python have the numbers(huge number of small scale sites) & luckily for PHP, some of the large scale sites using it have become so renowned that they are right there lying smug on top of the popularity list.